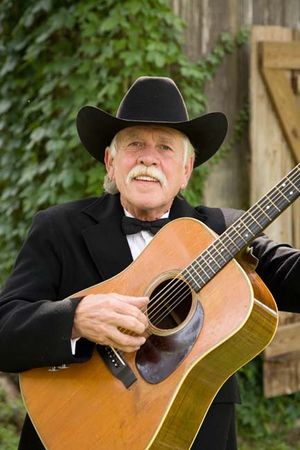 Steven Fromholz, one of Texas’ foremost singer-songwriters during the 1970s outlaw country era, died on Sunday January 19, 2014 following an accident with a firearm. He was 68. A keen outdoorsman, he was preparing to investigate a feral hog infestation that had been menacing the goat population in Schleicher County. The accident happened at the Flying B Ranch near Eldorado, about 40 miles south of San Angelo.Purveyor of what he termed ‘free-form, country-folk, science-fiction, gospel, cum existential bluegrass-opera music,’ the hirsute Steven Fromholz once looked likely to become the most talented has-been in Austin, a situation later reflected in his first solo album— 1976’s A RUMOUR IN MY TIME. In addition to singing and songwriting, Fromholz dabbled in acting, playwriting, poetry, record producing, narrating, jingle-writing, and white-water river guiding. In 2007, he was named Poet Laureate of the State of Texas by the Texas State Legislature.

Steven John Fromholz was born in Temple, Texas, June 8, 1945, to Lt. Col. and Mrs. A. A. Fromholz. When he was 10 years old his parents divorced and Steven and little brother, James, lived and attended school (for extended periods of time) with their widowed maternal  grandmother, Hirstine ‘Granny’ Hughes in Kopperl, Bosque County, Texas and their older sister, Angela (who was married and ranching in Bosque County, Texas). Those memories of small town, central Texas were the inspiration for Steven’s song The Texas Trilogy, long recognised as the most definitive song ever written about the State of Texas.

The set of three songs, meant to be played as one long work: Daybreak, Trainride and Bosque County Romance, portray life in rural Texas in the 1950s, set in the town of Kopperl, in Bosque County, Texas. Fellow Texan Lyle Lovett recorded the three-part saga on his CD STEP INSIDE THIS HOUSE, a tribute album to his favourite Texas songwriters. The poetry/writing style Fromholz exhibited in The Texas Trilogy is taught in many classrooms as being authentic Texas poetry, both in style and content.

Steven’s mother eventually settled with her sons in Denton, Texas, where Steven graduated from high school and attended North Texas State University. There he met fellow student Michael Murphey, the duo becoming part of the Dallas County Jug Band. After college he joined the US Navy and was stationed on the west coast where he continued to write poetry, music, play clubs and subsequently launched his music career after finishing his day’s Navy work.

Whilst still serving in the Navy, Steven married, his daughter, Darcie Jane was born and upon being discharged from the Navy he moved his young family briefly to Arizona. When his marriage ended in divorce Steven moved on to Colorado where he teamed up with Dan McCrimmon and the pair performed as Frummox. They released one album, FROM HERE TO THERE, in 1969 on ABC Probe, featuring Steve’s ambitious Texas Trilogy. The album is now considered a seminal work, pre-dating and foreshadowing the Texas Music scene-to-come, when Willie Nelson relocated from Nashville to Austin and became the icon of Outlaw music. At the time of writing, the album has never been officially released on CD.

The duo eventually went their separate ways and Fromholz accepted Stephen Stills’ invitation to play guitar and sing backup with the group that became Manassas on a world  tour. He moved to Austin in 1974 and there became an accepted part of the outlaw community, providing material and singing on Willie Nelson’s SOUND IN YOUR MIND. The first real Steven Fromholz solo album, A RUMOUR IN MY TIME, was an all-star soiree featuring Red Rhodes, Willie Nelson, Doug Dillard, John Sebastian, BW Stevenson and the Lost Gonzo Band. Released on Capitol in 1976 it fulfilled all the hopes of growing his cult following.

Possessing a classic, deep country voice, he sang like Glen Campbell and Johnny Mathis all mixed up and soused with whiskey. Dear Darcie and Ain’t It Nice To Be Alone were good drinkalongs with the merest taste of the Mexican in the mixes. Hobo Bob was more pensive and delicate with some clever wordplay, while the smooth and smoochy Knockin’ Wood was salvaged by one helluva fine acoustic guitar solo by good friend Willie Nelson.

Well-received in Texas and critically acclaimed around the world by the more discerning music pundits, it led to a second Capitol album. On the cover of FROLICKING IN THE MYTH he was pictured in a dickie bow-tie and tuxedo, a long way from the dusty Texas bars which spawned him.

So was the music. Very slick with lots of lush strings and sumptuous echoes. Just Like A Waltz, Hawkeye and Where Are They All Now come across like an uneasy mix of Campbell, Boz Scaggs and Roger Whittaker. Though, to be fair, it wasn’t quite as horrendous as that sounds. For Steven’s lyrics ring romantic but true and the arrangements were more atmospheric and dramatic than merely lush. His voice was too well-versed in the blues and rock to ever be swamped in crass commerciality. Check out Sophia and Magic Princess for the epitome of the real Steven Fromholz.

He had sung I’d Have To Be Crazy with Willie Nelson, which became a top ten country hit in 1976, and Nelson returned the favour by releasing Steven’s JUS’ PLAYIN’ ALONG on his Lone Star label in 1978. Other artists who recorded Steven’s songs include Hoyt Axton, John Denver, and Jerry Jeff Walker. He later released several albums on his own label, Felicity, named after one of his two daughters.

He also appeared in numerous movies including Outlaw Blues, Cloak and Dagger and co-starred in the thriller Positive ID. He worked extensively in theatre including starring roles in The Night Hank Williams Died, Woody Guthrie’s American Dream, Sweeny Todd, A Little Night Music, Fiddler on the Roof and Bosque County, Texas—a stage play he co-authored with Don Toner based on his  epic song The Texas Trilogy. He was often invited to speak to college groups and poetry societies, not only about The Texas Trilogy but other examples of his historically oriented writing, such as Man With The Big Hat and Last Living Outlaw.

In the 1980s Steven began entertaining on rafting trips in the Big Bend area of Texas, subsequently becoming a river guide, white-water expert, First Responder and EMT. He ‘ran the Grande’ (Colorado River/Grand Canyon) in 2000 which is the ultimate accomplishment for white-water guides and in 2005 Paddler Magazine voted him one of the 10 Best River Guides in America.

In addition to white-water trips he began hosting trail rides into Mexico; becoming the first Singing Cowboy for LaJitas Stables in Terlingua, Texas. A long-time member of the American Legion in Brewster County, Texas (Big Bend), he was well known as an advocate for Texas Parks &Wildlife and promoted their programmes, facilities and projects frequently.

Steven Fromholz was inducted into the Texas Music Hall of Fame in March 2003—and suffered a massive stroke less than 30 days later. After a three-year recuperative period, during which time he again learned to walk, talk, play guitar, sing—and literally re-invented himself—he returned to writing music, poetry and entertaining publicly. Exactly four years to the very day after the stroke, he stood in the State Capitol of Texas Chambers and was named Poet Laureate of his beloved State of Texas.

During his Poet Laureate tenure he travelled the entire State of Texas presenting a poetry and music programme he designed titled Steven Fromholz Texas Poet Laureate Words & Music Programme for Texas School Children. Children all over Texas gained a whole new perspective on poetry, literature, music and the arts.