This was a show I’d been looking forward to for weeks. I’ve always been into songwriters. For me, they are the driving force of music. When in Nashville, the Bluebird Café is my must place to be. It takes preference over all other venues or artist appearances. Though tonight’s show was much larger than the Bluebird, it had a similar vibe. Indigo was filled to capacity—apart from some no-shows in the media rows, which is par for the course, unfortunately—nigh on 1700 enthusiastic music fans. This had the CMA, the promoters and the performers totally amazed that so many people would be in attendance. Similar songwriters shows like this in America struggle to attract a few hundred, demonstrating the main difference between American and British country fans. In the main, for the UK fans it’s all about the music, whereas in America, it is more about the image, the hype and who is currently high on the charts, regardless of quality or integrity.

I’m constantly bombarded by veteran music fans, and even people involved in the media, whining about the state of modern country music. ‘There’s no decent songs being written these days,’ they'll say, and, of course, they are wrong. Good songs were in abundance at this concert: Kix Brooks, Brandy Clark, Sam Palladio, Jessi Alexander and Jon Randall sat yards apart and played gem after gem. This was not a jam session. It was the kind of thing that used to happen more often in living rooms and small clubs, far more modest than Indigo: old friends with guitars, trying to knock each other out with songs.

It takes ‘Champions’ to bring this quality of music to the masses, it takes a music magazine editor championing to their readers, a radio DJ championing to their listeners; a passionate blogger, or the next person who you walk past in the street telling their best friend about the latest Gretchen Peters’ record whilst having a beer after a long day at work. It’s either that, or we can just be spoon fed the latest musical package off the production line, mass marketed and mass advertised to the point that you know the inane words to the song and you don't even know why.

I know where I stand on this, and on this particular evening in South London, I was residing in musical Utopia, blissfully unaware of the everyday problems of life, totally immersed in the words and music of these talented songwriters, who were allowing us a glimpse into their world.

Throughout this magical, acoustic concert, the five took turns singing separately (and together) for just over two hours with no intermission. Kix Brooks (one half of Brooks & Dunn) got the evening started with an over-long preamble before launching into Red Dirt Road, a chart-topper for country music’s most successful duo in 2003. Alongside the others strung out across the stage, he seemed to be the odd-one-out. I saw a flat-packed, cartoon-country superstar-by-numbers, as cheesy, cliched and commercial as a Nashville tourist trap. Yet somehow he was very likeable. Not sure whether he was suffering from jet lag, maybe he’d even been drinking a little, but he seemed at times somewhat shambolic as the host of the evening. At times his speech seemed slurred, and some of his pre-song introductions were disjointed and over-long. Despite this, he offered us some well-written songs including Sacred Ground, which Kix recorded for his self-titled Capitol album in 1989 (pre-Brooks & Dunn). Three years later McBride & the Ride reworked the song and made number two on the country charts. In his gravelly but robust and warm, soulful tones, Kix also sung Brand New Man, Brooks & Dunn’s first number one hit from 1991 and You’re Gonna Miss Me, another chart-topper from 1995. 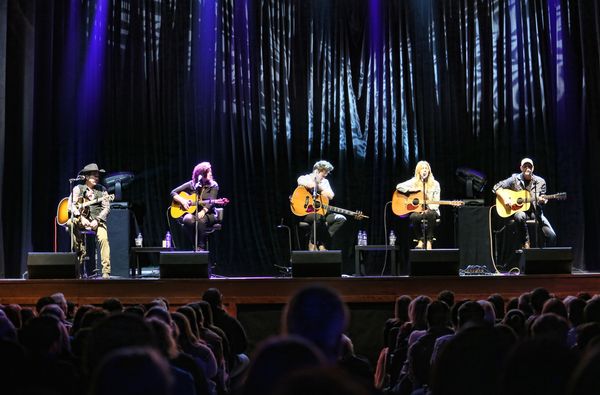 Brandy Clark was next along the line. A searingly truthful songwriter, notable as much for her lyricism—which can be caustic and emotional or wryly humorous—as for her deft musicianship, with her guitar playing enhancing the songs perfectly. She began with Mama’s Broken Heart, a huge hit she wrote for Miranda Lambert. Later came Follow Your Arrow, a co-write with Kacey Musgraves, a song that offended some of America’s more conservative country music followers, Two Rings Shy, another of her songs recorded by Miranda Lambert and the humorous Stripes. Brandy’s songs are from America’s backroads peopled by those who live a hard-scrabble existence. They are lyrically perceptive with the type of honesty that makes her a truly special artist—yet she’s also very down-to-earth, just an ordinary lady who just happens to make extraordinary music. I have a feeling that if she returns to the UK regularly, that Brandy Clark’s future over here is guaranteed for years to come.

No one has to tell Sam Palladio that Hollywood stars moonlighting as musicians don’t always get taken seriously. I’m sure he’s already faced crowds full of sceptics wearing expectant looks that silently challenge: ‘All right, actor boy, show us what you’ve got.’ For the Cornish-born actor, landing the role of Gunnar Scott in the Nashville TV series has given him a solid grounding, not to mention a sizeable fan following, judging by the screams and applause that greeted his introduction. He came across as competent, rather than spectacular. He was very modest, in an English way, playing down his talents as a singer and songwriter alongside the obviously more talented and successful players sitting either side of him. His songs could not really be termed country, verging more toward rock and pop at times. For me, the best was Train To Nashville, a song based on a story he was told by his grandfather. This was honest, emotional and truly from the heart … the mark of a genuine songwriter.

Nashville has long been a place to inspire artists. Countless thousands have tried to claw their way up a slippery slope trying to get some kind of recognition in a city that sets the highest standards for artists, yet also sets up roadblocks at every turn. None know this better than Jessi Alexander and her husband Jon Randall. Texas-born Jon moved to Music City in 1989 and though he worked steadily behind the scenes, his ambitions to become a successful artist were thwarted at every turn. He’s been signed to record deals with RCA, Asylum, Epic and Eminent, but only three albums out of the six he has recorded between 1995 and 2006 were ever released, whilst his singles all failed to chart. Jessi Alexander from Jackson, Tennessee, had been knocking around Music Row as a singer-songwriter for six years prior to signing with Columbia in 2004. Her superb HONEYSUCKLE SWEET album failed to produce a top 20 hit and two years later both Jessi and Jon were dropped by their labels.

They both made the decision to forego trying to make it as artists and to concentrate on songwriting. Without all the hassle and baggage of an artist career, both have blossomed as highly successful writers. Performing very much as a duo, both playing acoustic guitars and harmonising on each other’s songs, it wouldn’t be stretching a point to say that they were the highlight of the evening. Jessi’s voice is gorgeous and her songwriting superb. She performed Drink On It a chart-topper for Blake Shelton, the moving I Drive Your Truck, which became the CMA’s 2013 Song of the Year after Lee Brice took it to number one and Mine Would Be Mine another chart-topper for Blake Shelton. She finished her round with the powerful The Climb, a deeply personal song that has become a world-wide smash via the Miley Cyrus version.

Jon Randall’s voice was so clear and distinct in the Indigo that it sounded as if the place was purely constructed with him in mind. He proved himself to be time and again a masterful songwriter, singer, guitarist and performer. North Carolina Moon, an early song first started by his father, showcased his pure clear tenor. Recently it has been revived by Scotty McCreery and Alison Krauss as simply Carolina Moon. Jon co-produced UP ON THE RIDGE, probably Dierks Bentley’s finest album, he has also co-written several of Bentley’s hits including Am I The Only One and Draw Me A Map but it was Jon’s delivery of Whiskey Lullaby that stopped the room still as a painting. While some of Jessi’s and Jon’s songs were melancholy and others called for a box of Kleenex, many of the songs weren't really depressing, but rather thought provoking, while others were uplifting and positive.

This wasn’t a song and dance show, just guys and girls with guitars, passing the spotlight. Sadly, the whole ambience of the evening was broken when Striking Matches gate-crashed the concert just over half-way through to perform a completely inappropriate guitar-thrash number that was completely at odds with the rest of the concert. There’s a time and a place for everything and tonight wasn’t the time nor the place for such a performance. This was a showcase for songwriters in which the song was meant to be at the centre of it all, not for guitar virtuosity. I can only assume that someone in the Striking Matches’ camp has the ear of the right people at the CMA who staged the concert so as to be brought on in such a totally unethical way. For me (and I’m sure many others) their impromptu interruption broke a magical moment and spoilt the sequence of the evening. Despite this unnecessary intrusion, this still remained one of the best concerts I’ve witnessed so far this year.