Now in its third year, there’s little doubt that the Country To Country Festival at London’s O2 has proved way more successful than the most ambitious expectations. Mingling with the huge crowds around the various Pop-Up stages and venues at the O2 on Saturday and Sunday, it seemed inconceivable to say that the event just might be close to out-growing the venue. The numbers queuing to get into the massive and already packed-out Brooklyn Bowl and the smaller Saloon were difficult to comprehend, but even more incredible were the sheer numbers that crowded around the Big Entrance Stage, Music Mile Stage and Town Square Stage, making it almost impossible for those heading to the numerous attractions around the O2 to get through. I felt for the over-worked security staff who did a fantastic job under the very trying, but also very friendly and good-natured circumstances.

We arrived around 12 noon on Saturday, stopped briefly at the Big Entrance Stage as Megan O’Neill was finishing her set. The sweet-voiced Irish country-pop singer sounded rather good, but we needed to head off to pick up our media passes and circulate before it got too busy. After battling through the masses, taking time out to catch a song from the excellent Fitzwallace and chat to friends and acquaintances not seen in ages, we made our way to The Saloon for the Under The Apple Tree Sessions. Zoe Nicol and Rosie Jones, better-known as Worry Dolls, held the audience spellbound and I have to say I was entranced. With a blend of traditional Appalachia and olde-world folk they impressed with their ethereal Darling and the hypnotic Be So Cruel. Excellent and original songwriting, enticing vocals, both lead and harmonies, and good musicianship, this pair of youngsters can look ahead to a long and bright future on the folk circuit. 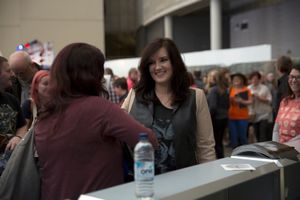 I’d hoped to stay for Angel Snow, but my mobile was vibrating with an urgent message for a lunch-time meeting. We then met up with Kimmie Rhodes for a coffee and interview in the Press Room. On the way back to the Music Mile Stage for Callaghan we bumped into Catherine and Lizzy Ward Thomas. They were looking for somewhere quiet to sit down and get a coffee. At the O2 during C2C that was akin to finding a water-hole in the Sahara. I suggested that we return to the Press Room, where it was indeed quiet when we left … and there was coffee on tap. As we arrived, Brandy Clark was doing a Q&A with press and radio, so we had our coffee and did some eavesdropping in a relaxed atmosphere before once more battling the crowds.

We had plans for the Brooklyn Bowl stage and Jess and the Bandits, but the venue was full to capacity, so we headed off towards the Big Entrance Stage for Case Hardin. The five-minute walk took close on 25 minutes as we were sidelined by friends every few yards for chats, so only caught their last song. We wanted to see Ward Thomas in the Brooklyn, so we retraced our steps and luckily as a few people tumbled out we were able to get into the heaving venue. Pauper Kings were on stage … it was very loud, rock music, with little or no connection to country or roots music. Though they played well, there was no subtlety, just a wall of sound with the vocals and lyrics hard to decipher.

We stood it out for the final ten minutes of their act, rather relieved when it finished. The sound was at a much more agreeable level as Ward Thomas took to the stage with their a cappella rendition of Loretta Lynn’s You Ain’t Woman Enough (To Take My Man). Then they served up their own excellent self-penned songs, with their vocals crystal clear over their young, punchy band. I was rather pleased at the end of their set to fight my way out of the Brooklyn Bowl, which seemed vastly over-crowded and extremely uncomfortable. I have to reluctantly admit I’m getting a little bit past these stand-up, ‘rock-styled’ gigs. 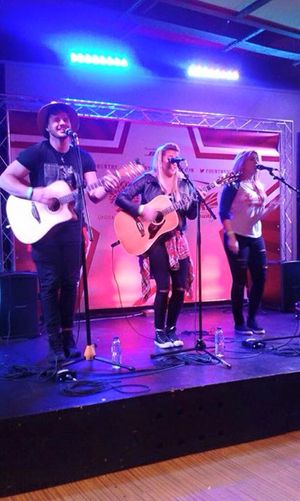 We arrived around the same time on Sunday and found even more people crammed into the O2 than on the previous day. It really was a struggle weaving our way around the O2 to the Saloon for Bob Harris’ Under The Apple Tree Sessions. I was somewhat downhearted when we got there to find the doors firmly shut and a sizeable line of people waiting to get in. Thinking it was running late, we joined the line, then realised that the security guy was barring the entrance because the venue was full to capacity. This was a calamity. We’d set our sights on catching Woody Pines, Kimmie Rhodes and Ward Thomas in that order. As we stood there patiently, Woody Pines turned up lugging their instruments, and like us, were unable to get past the security guy. Eventually, the door opened a crack, a couple escaped and I was able to catch the eye of Trudie Harris. Finally we were inside chatting to Bob Harris just in time to see Woody Pines take to the stage. 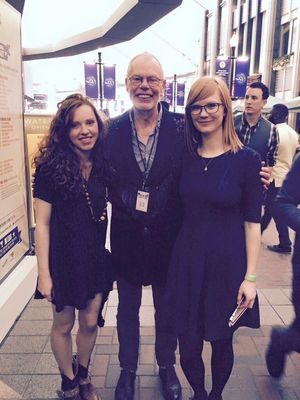 I have to sheepishly admit this was the first time I’d seen the trio in action. Post-O Brother Where Art Thou, I’d become a little tired of all the old-time string bands that were springing up like daffodils in the first week of March. But these Woody Pines were something special. The greatness of an old-time string band lies in its performance and Woody, Brad and Skip have that side of things sewn up tight. The Saloon was the perfect venue, packed to the rafters with enthusiastic music fans; the trio were red-hot as they percolated, rattling along almost to the edge. When you’ve got top-notch players like this, who have taken the time and patience it takes to get it right—that’s when great performances can be captured. In a short set they came close to taking the roof off the giant O2, but after 25 minutes they had to make way for the delightful Kimmie Rhodes.

In front of a rapt, intimate audience, Kimmie was in her element. Her emotional, literate songs need to be absorbed and the crowd, that ten minutes earlier had been a-whooping and a-hollerin’, were held under a spell as with just her acoustic guitar, Kimmie invited them into her living room. She regaled us with I Just Drove By (a Wynonna chart-topper), Worthy Cause (from her new COWGIRL BOUDOIR album) and Love And Happiness, each song exquisitely performed and prefaced with how Kimmie came to write them, adding extra depth of meaning.

Catherine and Lizzy Ward Thomas were up next with their equally young guitarist Dan Gordon. What he lacked in technique, he more than compensated for with enthusiasm and feel for the songs. It is the mark of a great song that when stripped down to the bare basics that it still sounds incredibly good and this acoustic performance showed that these twin girls’ songs are of the highest quality. 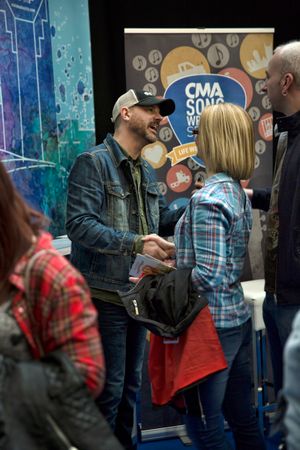 We realised that it was just after 2pm and we’d not had time for eating or even to get a drink. We headed off to get a quick sandwich as we didn’t want to miss out on Jessi Alexander and Jon Randall who were due on the Music Mile Stage in a few minutes. It was a rush and when we returned we found the crowd around the stage had increased ten-fold and it was virtually impossible to move. We found a suitable vantage point and as on the Friday evening Songwriters Show, Jessi and Jon revealed genuine class and definitely gained a lot of new fans. I caught up with them briefly afterwards and they were amazed at the size of the crowds and the reception they’d just received. They assured me that they intend to return to the UK, hopefully before the end of this year, for more shows.

It was time for a little peace and quiet so we headed for the Press Room, just in time to catch the Q&A with Jason Aldean. Met up with Chris Peters, an enthusiastic and passionate DJ who hosts his excellent Chris Country Radio (www.chriscountry.co.uk) which I urge you to sample. We had a wander around the various stages catching snippets of Callaghan, Sonia Leigh and Jess & The Bandits before ending up at the Town Square Stage for Flats & Sharps, a bluegrass band from Cornwall. A relatively young group, they proved to be not only superb musicians, fine singers and writers of good original material, but also highly entertaining, so much so that we stood and watched their whole set to round off the Pop Up Stages experience for this year.

It’s encouraging to see such large numbers supporting country music in the UK in this way at the O2. There appeared to be a large section of those watching the acts on the various Pop Up stages who were not there to see the big American acts in the main arena. Some were probably dedicated fans of a particular home-grown act, but I did wonder just how many had travelled to the O2 just to be able to see the mainly top-quality entertainment for ‘free.’ Would many of them go out of their way to see the acts at a venue near their home town when they would need to buy a ticket?

The reality is that the majority of the UK acts playing on the Pop Up stages over the weekend struggle to earn a living out there in the ‘real world’ of playing venues across the UK. For them to get to actually perform on the Pop Up stages is a huge financial investment. They receive no remuneration from the C2C promoters; they have to pay their own travel, accommodation, eating and parking expenses. They’re not even given backstage passes, so they miss out on the benefit of rubbing shoulders and interacting with the major American stars and their musicians.

I realise that it is the way of the world these days. Big conglomerates around the world employ staff on zero hours contracts or take on unpaid interns and subsidised cheap labour apprentices whilst they line the coffers of highly paid executives and shareholders. I’ve been involved in music for more than 45 years and it didn’t used to be this way. It was more of a level playing field. I know we should not look back at the so-called ‘good ol’ days,‘ but I recall when UK acts appeared at the Wembley Country Music Festival in the 1970s and 1980s. Then they performed on the main stage alongside the American acts. They were paid a fee (okay, it was a fraction of what the American acts received, but it was the going rate, and taking in inflation, in today’s money, would work out at around £3000!). They were also allowed backstage to mingle with the American acts with whom many long-term relationships were formed.

I firmly believe that it’s vital that the C2C promoters and the CMA begin to nurture the British acts in the same way that they do the American acts. Country music in the UK is currently experiencing something of a boom and our home-grown performers need to be able to take advantage of this. That will only happen with investment into the performers, whether it be financial, promotion of concerts and tours or some kind of mentoring, development and networking system. Everyone involved in country music in the UK needs to work together in some way by sharing knowledge and experience to assist these passionate performers and the whole scene to become more financially viable. This is a golden opportunity that should not be lost by exclusion or greed.